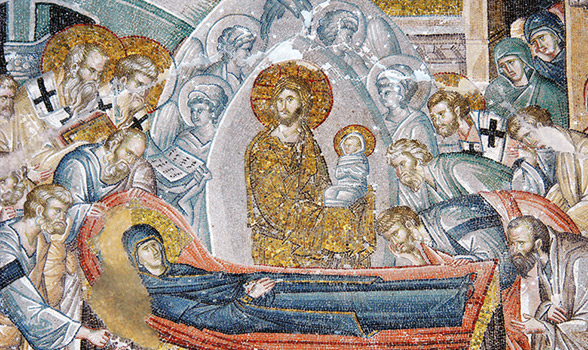 Chora (Kariye) is situated inside the ramparts of Istanbul in Edirnekapi district. The word chora means outside the city, the countryside in ancient Greek.

Although there is no precise information about the construction date, it is known that there was previously a chapel here. Chora (Kariye) church / kirke was constructed along with the monastery in about 536 during the reign of emperor Justinian I (527-565). the church got damaged in the Iconoclastic period (726-842) and was restored at different times. The removal of the imperial dynasty to Blachernae Palace in the reign of the Comnenus dynasty (1081-1185), and the performance of some religious ceremonies in Kariye church, which was close to the Palace, considerably increased significance of the church. As a result, the mother-in-law of the emperor Alexius I )1081-1118) Maria Doucina took the derelict church under her protection and had it renovated. However, the church was pillaged during the Latin Invasion (1204-1261) and witnessed great destruction.

The golden age  of the museum was during the reign of emperor Andronicus II Palaceologus (1282-1328). A great statesman, politician, scholar and man of letters, Theodoro Metochites had the church restored considerably. A corridor was added to the northern wing of the church, consisting of narthex and main floor, as well as a parecclesion, a narrow and long single-naves chapel adjacent to the southern face, and an exterior narthex running along the western face. The mosaics ornamenting the inner and outer narthexes, and frescoes ornamenting the parecclesion, were also done in this period. The high-tamboured and windowed dome sits on four arches above the main floor, which ends with a semi rounded apse at the ester end. The ground is marbled and the walls are coated with marble plates. These marble plates are as priceless as mosaic decorations for they are both old and figured.

The richest mosaics and frescos of the late golden age of the Byzantine Empire can be seen in Kariya (Chora). The lives of the Virgin Marry and Jesus are depicted in mosaics decorating the walls, the arches, the vaults, and the domes on the interior and exterior narthexes.