Tag: Palace of the Porphyrogenitus 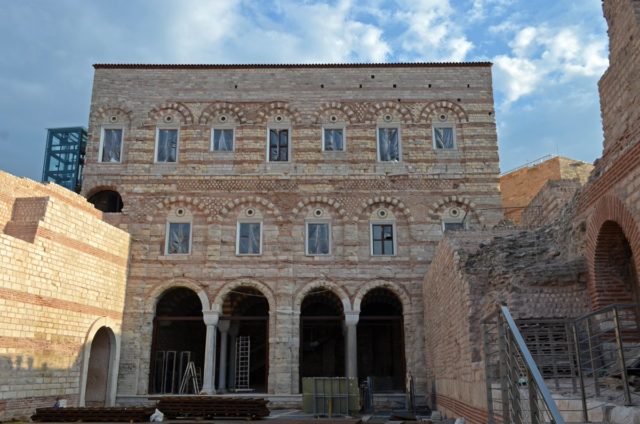 History
The Palace was constructed during the late 12th or early 13th centuries as part of the palace complex of Blachernae, where the Theodosian Walls join with the later walls of the suburb of Blachernae. Although the palace appears at first glance to be named after the 10th century emperor Constantine VII Porphyrogenitus, it was built long after his time, and is in fact named after Constantine Palaiologos, a son of the Emperor Michael VIII Palaiologos. “Porphyrogenitus”, meaning literally “born to the purple”, indicating a child born to a reigning emperor. The palace served as an imperial residence during the final years of the Byzantine Empire.

The palace suffered extensive damage due to its proximity to the outer walls during the Ottoman conquest of Constantinople in 1453. Afterwards it was used for a wide variety of purposes. During the 16th and 17th century, it housed part of the Sultan’s menagerie. The animals were moved elsewhere by the end of the 17th century, and the building was used as a brothel. From 1719, the Tekfur Sarayı pottery workshop was established, and began to produce ceramic tiles in a style similar to that of İznik tiles, but influenced by European designs and colors. The workshop had five kilns and also produced vessels and dishes.[2] It lasted for around a century before going out of business, and by the first half of the 19th century, the building became a poorhouse for Istanbul Jews. In the early 20th century, it was briefly used as a bottle factory, before being abandoned.[3] As a result, only the elaborate brick and stone outer façade survives today, the only major surviving example of secular Byzantine architecture. As of 2006, the palace was undergoing extensive restoration.

Architecture
The Palace was a large three-story building located between the inner and outer fortifications of the northern corner of the Theodosian Walls. The ground floor is an arcade with four arches, which opens into a courtyard overlooked by five large windows on the first floor. The top floor of the structure project above the walls, and has windows on all four sides. On the east is the remnant of a balcony. The roof and all of the floors of the structure have disappeared. The remaining walls are elaborately decorated in geometric designs using red brick and white marble typical of the late Byzantine period.