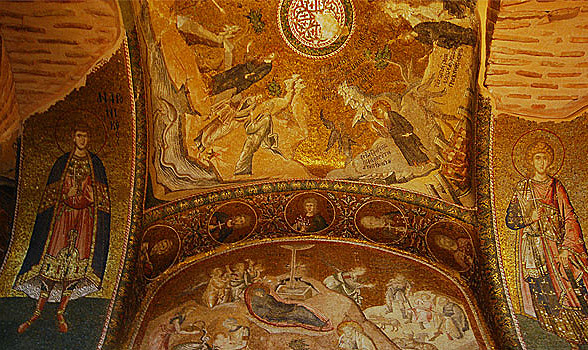 1. Ancient Byzantine Church – The Kariye Museum, or Chora Church, was originally constructed during the 4th Century AD. It is located in the Edirnekapý district in the western reaches of the city. Although the Kariye Museum can be quite a trek compared with most Byzantine architecture located in and around Sultanahmet, this museum’s unusual design and dazzling array of frescoes simply cannot be missed.
2. Generations of Remodeling – We know little about modern Chora Church’s predecessors but doubtless its previous incarnations underwent many remodeling projects, like pretty much all ancient Byzantine structures, as a necessary consequence of Istanbul’s frequent earthquakes. Any ancient frescoes and icons were more than likely destroyed during the iconoclastic period when depictions of Christ and other human figures were prohibited by the Orthodox Church (the same shunning of human figures would be visited on Kariye Museum during its life as a mosque). The current version of the Chora Church was built during the 11th century by Maria Doukaina, mother-in-law of Emperor Alexius I Comnenus. The frescoes for which Kariye Museum is famous were added during the 14th century.

3. Nice Try – During the siege of Constantinople, Chora Church was in the thick of the action due to its proximity to the western walls, the weakest point of the Byzantine defenses. As the situation became increasingly ominous, the icon of Theotokus Hodegetria-a depiction of the Virgin Mary considered to be a strong protector of the city-was brought to Chora Church in order to provide some Divine aid. History clearly dictates that this noble effort was in vain as the Ottomans pierced the western walls on May 29th and took the city by storm.

4. Converted to a mosque – Chora Church was converted to a mosque by Grand Vizier Atik Ali Paþa during the reign of Sultan Beyazit II in the early 16th century. The Ottomans did not significantly alter the church during conversion though they did replace the grand dome, which had fallen in during an earthquake. The frescoes were covered by dirt, paint, and plaster for centuries until the former glory of Chora Church was entirely forgotten. The building was rediscovered in the mid 19th century and restored to a significant degree by the Turkish government. An American Byzantine cultural foundation further restored the frescoes in 1948 and it was then converted into a museum.

5. What’s in a Name? – Kariye Museum was first named “The Church of the Holy Savior Outside the Walls.” In fact, the word Chora means “country” in Greek. The name alludes to the fact that at the time it was built the Chora Church was located outside the walls built by Constantine the Great. Within a century of its construction the Emperor Theodosius would construct the current western walls, which would enclose Chora Church and make its very name an artifact. As a mosque the Kariye museum has been referred to as “Atik Ali Paþa Camii” after the vizier who had it converted, “Kenise Camii” and “Kariye Camii” until it finally became Kariye Museum in 1948.

6. Ravages of Time – The Kariye Museum has suffered at the hands of many disasters, both human and natural. At various times, earthquakes have damaged the foundations, walls and roof of the church, requiring frequent renovation. The first major recorded renovation occurred in the late 12th century after the Latin Occupation when an earthquake caused a partial collapse of the foundations and the current nave was constructed. Fires have ravaged the church, even destroying some of its frescoes. The Latin Conquest in 1204 and the Ottoman Conquest in 1453 also stripped the church of its riches. After its conversion to a mosque, the Kariye suffered principally from neglect as a non-descript mosque in the outskirts of the city until it was rediscovered and its masterful works of art were painstakingly uncovered.

7. Frescoes! – Noted Istanbul scholar John Freely has given Chora Church second place behind only Aya Sofya among Byzantine buildings principally for its frescoes, which Freely has referred to as; “far and away the most important and extensive series of Byzantine paintings in the city and among the most interesting in the world.” Chora Church easily outdoes Aya Sofya in painting as there are far more frescoes, they are in notably better condition and-due to the museum’s small size-they are much closer and more accessible to the viewer. Entering the southern entrance to the Kariye Museum and proceeding from the parecclesion, an annex to the ancient church, through the outer and inner narthex toward the main nave, you cannot help but be struck by the radiant colors and vivid figures that are quite literally Christian history in painting. Various panels depict the life of Christ and Mary, Christ’s ancestry, the history of the ancient church and even Judgment Day. The faces are not the crude visages typical of medieval iconic art but rather humanistic renderings that seem to emote sadness, suffering and serenity. The highlight for me was the “Anastasis” fresco, a painting at the eastern end of the parecclesion that is a page straight out of the “Divine Comedy.” This painting depicts Christ, during his three days in Hell before the Resurrection, forcibly pulling the ancient Jewish patriarchs from their captivity in the Inferno.

8. The Great Patron – The man principally responsible for Kariye Museum’s eye popping frescoes is Theodore Metochites. Metochites was something of a Renaissance man (albeit two hundred years before the Renaissance). He held the position of Grand Logethete (auditor of the treasury) under Emperor Andronikos II. Metochites was also a poet, scholar, scientist and patron of the arts. In 1312 Metochites commissioned the painting of the great frescoes in Chora Church. A panel painted over the doorway to the inner narthex depicts Theodore Metochites in his full dress robes offering a model of the church to the enthroned figure of Christ. Tragically Metochites power was not to last as he was stripped of position and riches and even imprisoned by the usurper, Andronikos III. Near death, Metochites was freed and allowed to live out his days as a monk and scholar in the Chora Monastery where, upon his death, he was entombed in the church that he helped immortalize.

9. Climbing the Walls – Edirnekapý, which is adjacent to Fatih, is not the safest district in Istanbul, however, during a daytime visit and exercising a little common sense, you shouldn’t have a problem. Nearby Kariye Museum is the Edirne Gate, location of the gate in the Theodosian walls where the road to ancient Adrianople passed through the walls westward out of the city. If you have not done so already, a walk along the Theodosian walls is a necessary experience to truly appreciate both Byzantine history and the Ottoman conquest. These massive walls, which have been inscribed in both Ottoman and Greek script, are pock marked by cannon balls, have collapsed in some places and been quite obviously rebuilt in others. They are largely intact, nonetheless. Modern plaques commemorate places where the Ottomans breached the walls on May 29th, 1453. A walk along the top of the walls can be a treacherous experience as they are quite high and not always in mint condition. If you are brave enough to climb to these battlements, however, the view is spectacular.

10. Getting There – Kariye Müzesi is located on Kariye Camii Sokak in Edirnekapý. Visiting hours are 9-4:30 Thursday through Tuesday (hours are extended to 6:30 PM June through October). Admission is 10 YTL. Take bus #’s 28 or 36KE from Eminonu or bus # 87 from Taksim. A taxi  ride from Taksim should cost between 10 and 15 YTL.